Episode 2 of RHINOX TV is out now! Ever wondered what make a Rhinox bucket so good? Take an up close look at some of the excellent features that make the Rhinox Mini Digger Grading Buckets so unique! Terry and Dale discuss what maximises the strength and wear resistance of the buckets, and also some of the design and tracability features as well!

See the full episode below: 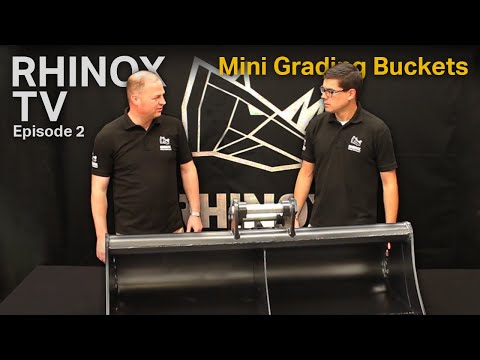 Welcome to Rhinox TV Episode 2 – We are here today to talk about the rhinox mini excavator grading bucket.

This is a fine looking bucket, Dale. Tell me a bit about it.

Well the first place I would like to start is the hanger area. As you can see we have bossed hangers and removable pins. We do that because that allows you to replace the pins as they get worn out. Often people weld in the pins, that means that if the pins do wear, the bucket is effectively scrap without doing a lot of work to replace this area.

The next feature I will point out is the shell design. I don’t know if you’ve noticed but this shell looks slightly different to some other buckets on the market. Often people use a top tube, whereas we have taken the decision to completely reinvent the bucket, so we’ve got a single piece shell that runs right from the lip plate right round to the top here, now the only weld you have got is on the front edge here, which is very accessible for the welder and you can get a really good weld on the front here which really maximises the strength of the bucket.

So it makes them last longer then?

Yeah, definitely, we are all about maximising the strength of the buckets.

We do that because the ditching bucket is obviously a lot wider than a standard digging bucket and as a consequence tends to be slightly weaker in the middle. So we put this centre web in which really maximises the strength in the centre of the bucket. We do that from the 3 ton ones right up to the 20 ton ones.

Good, and I noticed that you’ve got a reinforced leading edge which I think that’s a good idea that. Tell me a bit about that?

Again, a lot of people just have a single piece side plate that runs right the way through, the trouble with that is that the front tends to wear, that’s were most of the wear comes on the bucket. So we beef that bit up, we strengthen that up with a thicker leading edge there. We also have a wear plate here, which I know it carries the branding but that actually doubles up as additional wear resistance on this bottom edge of the bucket which really maximises the wear resistance.

Thats a very, very good idea, excellent!. And then you have got drainage holes as well, just tell me a bit about those.

One other I’ll point out is that on the 3 ton and up grading buckets, we have a drilled front edge, which allows a bolt on blade to be fitted. So you can fit an additional under blade, which really maximises the wear resistance of the bucket.

I suppose if you have a double edge on it you can turn it around as well?

Yeah, that’s exactly right, they are bolt on and they have 2 wearing edges on the under blade, which allows you to turn them and got more wear out of those as well.

I noticed you’ve got a serial number badge on the back here. Tell us a bit about that?

Yep, we have complete trackability on the buckets as well, so we can trace it back to the welder that actually produced this bucket. Should there be any problems, it allows us to identify the problem, and have full quality control right through the process.

That’s excellent, it shows you believe in what you do!

Top 5 Excavator / Digger Attachments for Landscapers - Your MUST HAVE equipment! (Video)

Top 5 Excavator Attachments for Landscapers - Your MUST HAVE equipment! Landscaping can be an overwhelming field to ...
Read More

How do I protect my digger bucket from getting damaged?

How do I protect my digger bucket from getting damaged? If you're looking for an answer to this question, then you k...
Read More